The Romans loved novelty: the more unusual, exotic and outrageous, the better. Women who fought in the gladiatorial arena, those we now call gladiatrix, ticked all these boxes. In the Roman world, war and combat were considered to be for men, so women wearing armour and fighting one another was a real spectacle!

One of the most famous depictions of gladiatrix can be found in the British Museum. A circa 2nd century marble relief from the city of Halicarnassus (now Bodrum in modern-day Turkey) depicts two women wearing armour and holding swords seemingly in the process of fighting one another.

The women’s names are recorded as Amazon and Achillia and would suggest that they, like the majority of gladiators, were enslaved. Their names were not traditional ones, but rather linked to their position as gladiators, with Amazon referencing the Amazons, mythical* female fighters, and Achillia the legendary Greek hero, Achilles.

*We will look at the Amazons in a later post but, in the meantime, Adrienne Mayor has written a fantastic book on the subject: The Amazons: Lives and Legends of Warrior Women across the Ancient World (2014).

As Kathleen Coleman argues, the relief may have been used to commemorate Amazon and Achillia’s missio which was essentially a reprieve granted by the editor (the games sponsor) from their service for the duration of the games, i.e. the gladiators were able to return to their barracks for further training.

The missio may have been granted as the two women had drawn in conflict, as indicated by the removal of their helmets. Unlike the gory scenes we see on films and television shows like Gladiator and HBO’s Rome, gladiatorial conflict did not always result in death (see debate in Kyle or Jacobelli). The upkeep and training of gladiators was expensive, and it was only on special occasions that gladiators were (deliberately) killed during games.

Anna McCullough suggests that the first female gladiators may have been introduced in the late Republic, a time which saw a rise in the popularity of gladiatorial combat. However, the first literary reference to gladiatrix appears in reference to Nero’s reign:

The same year witnessed a number of gladiatorial shows, equal in magnificence to their predecessors, though more women of rank and senators disgraced themselves in the arena.

There was clearly some concern about the involvement of wealthy, elite Romans participating in gladiatorial combat as the Roman senate passed at least three pieces of legislation banning upper class men from fighting in the arena (McCollough, Coleman). McCullough has suggested that high-status women may also have been included in this ban, and this links with Coleman’s discussion of literary sources concerning gladiatrix. However, Nero had a bad reputation and, as it was unacceptable for the upper classes to appear before an audience, ancient writers were able to highlight Nero’s inappropriate and excessive behaviour by referencing elite women appearing in the arena.

Coleman argues that ancient sources take more issue with the status of the women involved in gladiatorial combat, rather than their gender. Gladiators were classed as infames, essentially people who lacked social standing in Roman society. Therefore, high-status women were not only subverting gender norms – by engaging in combat – but deliberately lowering their status by performing in the arena. For instance, Cassius Dio stated that the Emperor Titus included women in a beast hunt during one of his games. However, Dio stresses that the women in question were not noteworthy, suggesting that the inclusion of female gladiators in games could be seen in a positive light.

There was a battle between cranes and also between four elephants; animals both tame and wild were slain to the number of nine thousand; and women (not those of any prominence, however) took part in despatching them.

In fact, as McCullough suggests, even ‘bad’ emperors could employ gladiatrix, as long as they were not upper class.

[Domitian] constantly gave grand costly entertainments, both in the amphitheatre and in the Circus, where in addition to the usual races between two-horse and four-horse chariots, he also exhibited two battles, one between forces of infantry and the other by horsemen; and he even gave a naval battle in the amphitheatre. Besides he gave hunts of wild beasts, gladiatorial shows at night by the light of torches, and not only combats between men but between women as well.

Female gladiators may have been relatively rare in the ancient world, and ancient authors were clearly more concerned about the status of the women involved than the fact they were women. In turn, ancient authors could use references to gladiatrix to highlight an emperor’s characteristics – good or bad. Beyond such concerns, ancient authors had little interest in gladiatrix, and we know very little about their lives.

Despite the lack of information about gladiatrix, their legacy has been hugely important in capturing popular imagination in recent years. Today, like the Romans, we tend not to associate women with violence and combat, so we retain a fascination with women who fight –now and throughout history. For instance, there are countless books which feature gladiatrix characters, films which include gladiatrix cameos, and even documentary series desperately seeking more answers about the lives of these women. With new discoveries being made every year, one day we may know more but until then, gladiatrix remain mysterious figures who continue to fascinate us.

A few things to note

The British Museum. Relief from Halicarnassus. 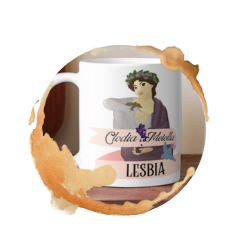